The subunit area is located in the SW part of the Magura District and falls within Shalikha Upazila. Administratively the sub-unit area is covered by 2 unions namely Dhaneswargati and Talkhari. It comprises 2306 hectares with 15 villages. There are 5,648 households with a population of 22,476.

The water infrastructure will benefit from the rehabilitation of one regulator, pipe inlet/outlet, foot-bridge/culvert and WMO office and re-excavation of khals over a total length of almost 8.90 km will reduce flooding and drainage congestion and thus benefit agricultural production. The cost of rehabilitation is estimated at some Tk. 273.32 lac.

A Maintenance Plan for the subunit-I has been formulated where responsibilities have been delineated and costs for maintenance worked out. The total cost of preventive and periodic maintenance for subunit-I has been estimated as Tk. 10 lac per annum of which WMA share would be Tk. 3 lac with BWDB bearing Tk. 7 lac. The WMA / WMG share comes to Tk.81/ha/year. The cost of WMO training has been estimated at about Tk. 12 lac.

To improve the existing agricultural conditions and to transfer the modern technology to the farmers’ level Training, Demonstration, Farmers’ Field School (FFS), Workshop, Fair, and Motivational Tour have been planned for implementation by the project. The cost of agricultural development (enhancement) activities of the SIP has been estimated at Tk 24.10 lac.

There is about 183 ha of fisheries resource in the subunit area among them 86 ha in culture fisheries and the rest of 97 ha in capture fisheries, and estimated total production is 332 MT/year (Table - 01, Annex - 4). Culture fish production can be increased from 313 MT to 408 i.e by 95 MT but capture fish production will be increased from 18 MT to 21MT i.e by 3 MT after rehabilitation of this subunit area and the total annual incremental benefit would be Tk. 44 (Table - 3, Annex-4).

Financing of the fisheries activities would require both beneficiary and project contributions. Beneficiaries will be responsible for all direct inputs cost required for fisheries production, both culture and capture because they will manage the activities through CAPs. The project will bear the cost of demonstration, basic training, refreshment training and motivational tour. The training cost (excluding preparation of modules) amount to some TK.46.80 lac (Table 04, Annex -4)

The SIP-4 area comprises 21 villages and 3 Unions partly or fully, under Shalikha Upazila of Magura district. The total household of the SIP-4 is 5475, population 21032, and the average HH size is 3.84. The land per household is 0.39 ha, which is much lower than the national average of 0.8 ha. The percentage of farmers is 37%. The river Fatki follows at the Northern boundary of the SIP-4 area.  Digital gram Branch 1 and 2 khals, Deghalgram Khal, and other small has crossed the SIP-4 area, which is connected with the Fatki river. Tahari and Dhaneshwarigati union parishads located in the middle of the SIP area. The total households of the surveyed area of SIP-4 is 5475 and the population is 21032. The sex ratio is defined as the number of males per 100 females. The percentage of female-headed and male-headed households is 4.36% and 95.65% respectively. Farming is the main occupation of all categories of farmers 39.56%, followed by business 24.20%, service 18.22%. The other occupation is 12.74%, which includes; daily wage laborers, fishermen, hawkers, traders. The wage laborers are mostly found in landless, marginal and small farm families. Fish farming, trading and business as family occupations are found in all level farmers. The actual fisherman is very exceptional. Landless, marginal and small households who have zero assets are called extremely vulnerable or destitute. On average there are 4-5 per village. Housewife constitutes 3.6% mostly work at home for housekeeping, agricultural product processing and storage, poultry and cattle rearing and vegetable gardening, childbearing and rearing etc. to meet the need of household demands. that the majority of the households 61.88% earn monthly below Tk.12000, they all are living in poverty level, followed by 21.49%, who earn >Tk.12001-Tk.18000 falls in the lower-income group, the third income group is 23.45%, who earns monthly Tk. 18001-Tk.23000 falls in the lower-income group and the people (6.43%) who earn Tk.23001-Tk.28000 falls in the Middle-income group and the people who earn above Tk. 28,000 falls in the high-income group (5.88%). For the development of the destitute and Female-Headed households, a total amount of Tk.20,05200 has been allocated.

WMO formation process commenced with mobilizing Facilitators and awareness creation. Union-level consultation workshops were conducted and consent for rehabilitation work has been obtained from the communities. As the population has increased significantly since the Feasibility Study (FS) time, the project “re-demarcated WMG areas”. Consequently, the total number of WMG's increased from 4 (at FS stage) to 10. Ten (10) Ad-hoc committees have been formed. Elections were held and 10 EC of WMGs have been formed.

Participatory mechanisms will be adopted for developing and reaching consensus on “WMG-wise water and land use plans”, mainly for crops, fishery, and other IGAs. Facilitators guided by ISPMCs and PMO staff will assist WMGs to implement these Plans. Sub-committees are established which “focused” on specific tasks of WMO. There will be O&M Agreements between WMA and BWDB.

The Subunit Implementation Plan should have practical implementing mechanisms to establish “horizontally and vertically integrated WMO Network”, with WMG as the “Base” organization. WMO Network (WMG-WMA) would be utilized by line agencies like BWDB, DAE, DOF, and other GoB agencies (in their Extension and Input Services).  WMO's need to be equipped with appropriate technology. WMO's should organize Collective Action, CA for effective O&M, to provide WMO-managed input-output services to members in agriculture, fishery and other income-generating activities and value-addition. 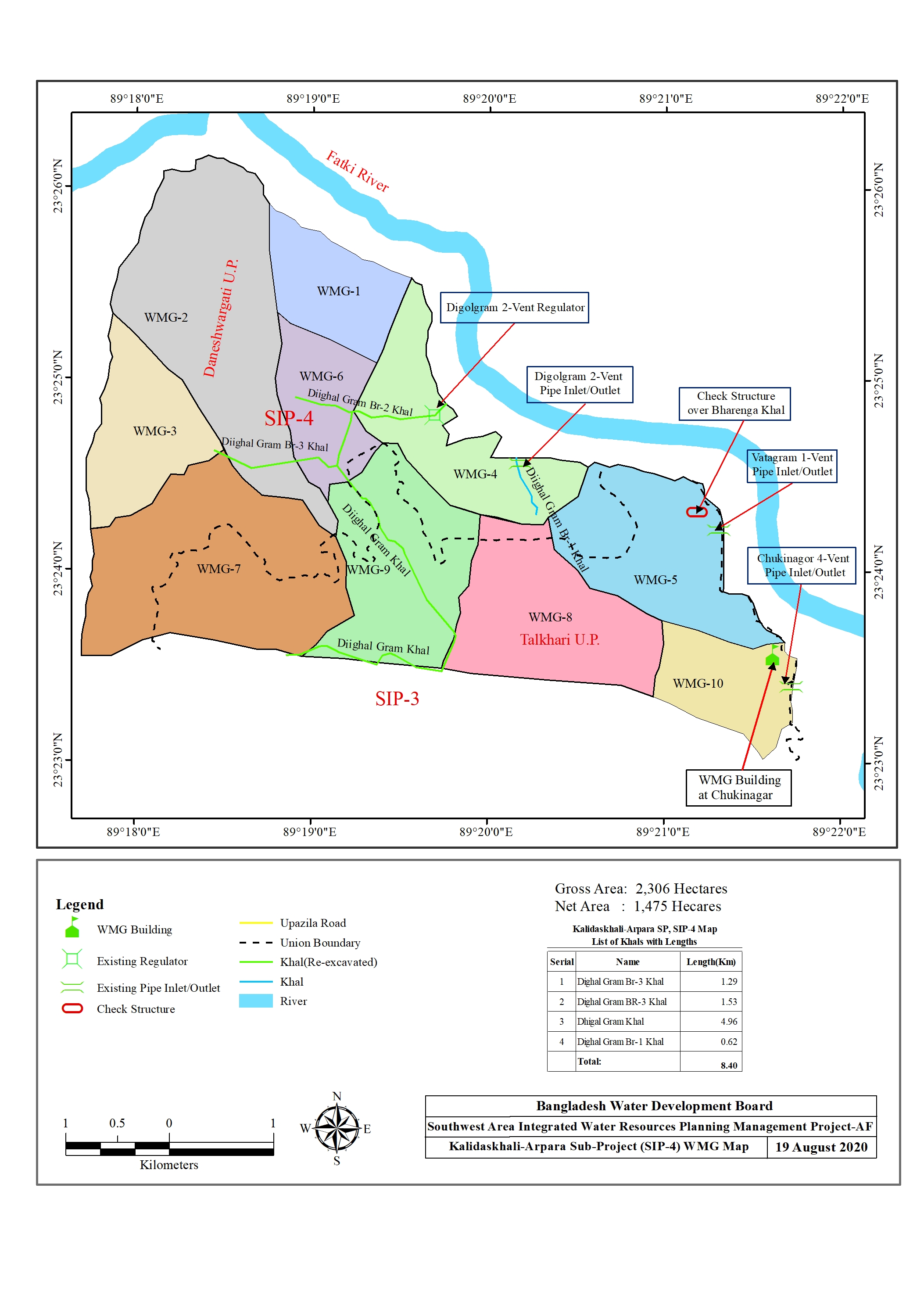