The sub-unit area is located in the SW part of the Magura District in Shalikha Upazila. Administratively the sub-unit area is covered by two unions namely Arpara and Bunagati, It comprises 3,468 hectares, 10 WMGs with 17 villages. There are 5,648 households with a population of 22,476.

A Maintenance Plan for the sub-unit-II has been formulated where responsibilities have been delineated and costs for maintenance worked out. The total cost of preventive and periodic maintenance for subunit-II has been estimated as Tk. 62 lac per annum of which WMA share would be Tk. 16 lac with BWDB bearing Tk. 46 lac. The WMA/ WMG share comes to Tk.231/ ha/ year. The cost of WMO training has been estimated at about Tk. 12 lac.

The gross area of the Kuchiamara sub-unit (Sub-unit area-2) is 3,468 ha. and the net cultivable area is 2,790  ha. The present cropped area is 6,439 ha with a Cropping Intensity of 231%. The future total cropped area has been estimated at 6,970 ha with a Cropping Intensity of 250%. The production of cereal crops will be increased by 4,947 metric tons (31%) and other crops by 1,885 metric tons (31%) with an overall increase in production by 6,832 metric tons (31%) after the rehabilitation of the sub-unit area. Rice production has been estimated to be increased from 15,793 MT to 20,725 MT (31%) per year with an additional increment of 4,932 MT representing an estimated added value of Tk1110 lacs. The average yield of rice has been estimated to be increased from 3.75 ton/ha to 4.35 ton/ha. To improve the existing agricultural conditions and to transfer the modern technology to the farmers’ level Training, Demonstration, Farmers’ Field School (FFS), Workshop, Fair and Motivational Tour have been planned for implementation by the project. The cost of agricultural development (enhancement) activities of the SIP has been estimated at Tk 36 lac.

There are about 507 ha of fisheries resource in the subunit area among them 105 ha in culture fisheries and rest of 403 ha in capture fisheries, and the estimated total production is 290 MT/year (Table - 01, Annex - 4). Culture fish production can be increased from 244 MT to 382 i.e by 137 MT but capture fish production will be increased from 46 MT to 62 MT i.e by 16 MT, after rehabilitation of this sub unit area and total annual incremental benefit would be Tk. 60 lac.

Financing of the fisheries activities would require both beneficiary and project contributions. Beneficiaries will be responsible for all direct inputs cost required for fisheries production, both culture and capture because they will manage the activities through CAPs. The project will bear the cost of demonstration, basic training, refreshment training, and motivational tour. The training cost (excluding preparation of modules) amount to some TK.50 lac.

The SIP-II area comprises 17 villages and 2 Unions partly or fully, under Shalikha Upazila of Magura district. The total gross area of Sub unit-2 is 7,430 ha. The total household of the SIP-2 area is 5,733, the population 22,476, and the average HH size is 4. The land per household is 0.77 ha, which is lower than the national average of 0.8 hac. The percentage of farmers is 30%. The population who are in between  18-60 years considered as a working-age group or productive population. The data shows that the working-age group of the surveyed population is about 60%. The river Chitra River follows at the Southern boundary and the Fatki River at the northern boundary of the SIP-II area. Kalidaskhali khal, Kalidaskhali branch khal, Hazrkhali Khal, Kathalbaria branch khal, and other small khals crossed the SIP-II area, which are connected with the Chitra river and Fatki river. The percentage of the female-headed and male-headed household is 7% and 93% respectively, who are widows, separated, live with disable husband, and survive with their own income. It is expected that the implementation of the project will improve the socio-economic condition of the destitute and female-headed households. Total Tk.1420000 has been estimated for the livelihood enhancement purpose.

WMO formation process commenced with mobilizing Facilitators and awareness creation. Union-level consultations were conducted and consent for rehabilitation work has been obtained from the communities. The population has increased significantly since the Feasibility Study (FS) time, hence the project “re-demarcated WMG areas”. Consequently, the total number of WMG's increased from 8 (at FS stage) to 10. Elections were held and all the WMG's have been formed.

ISPMCs and PMO will conduct Quarterly “Participatory Performance Assessment and Target Setting” (PPATS) sessions with Facilitators and WMO Monitors to assess their performance as well as the success of WMO development activities. PPATS would be introduced to WMOs as one of the “exit strategies” and for ensuring the sustainability of GMOs. Strengthened WMOs would effectively undertake their primary functions like Operation and Maintenance (O&M) of infrastructure, providing production and related services in agriculture and fishery, livestock as well as other livelihood activities. 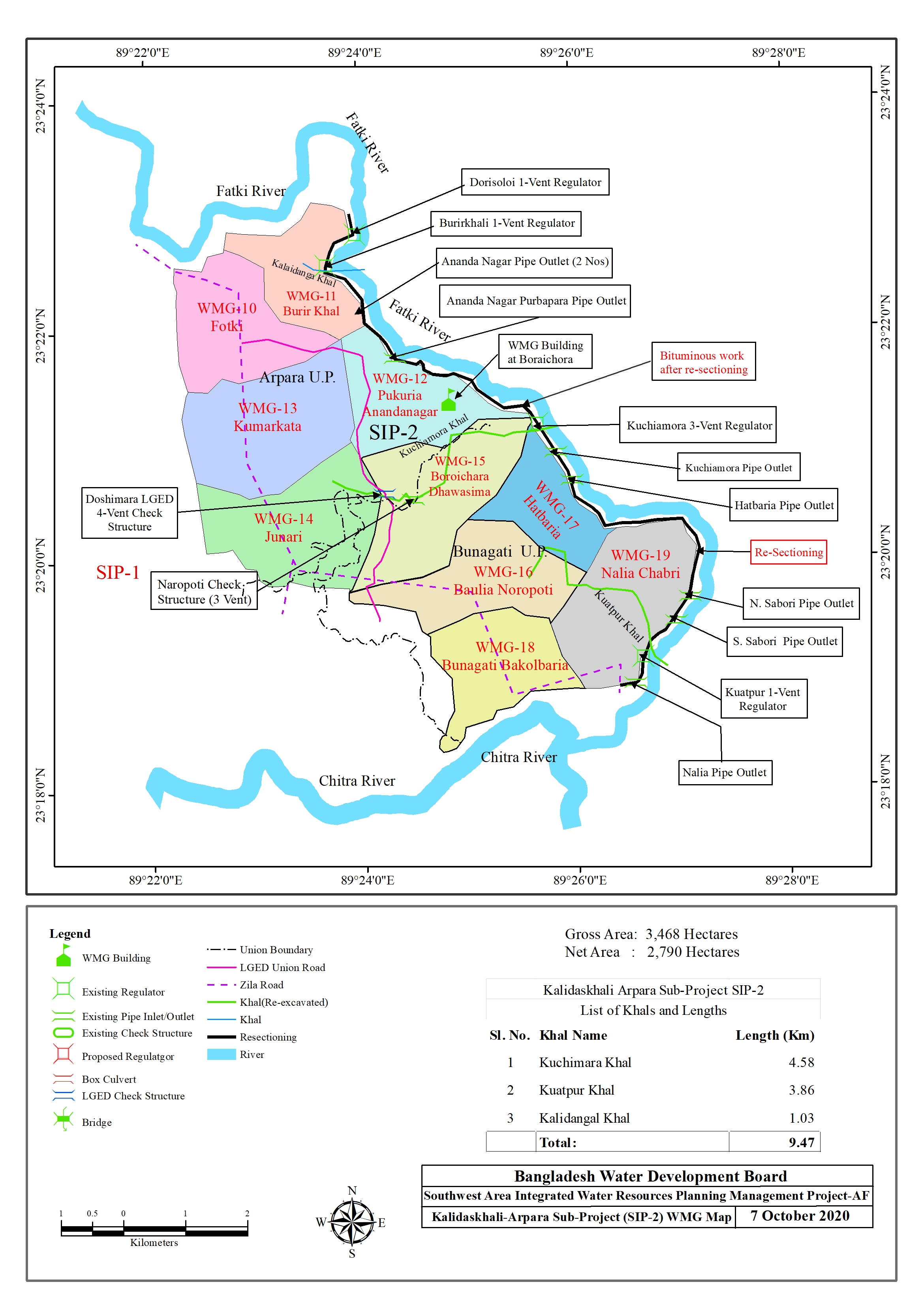