The subunit area is located in the SW part of Faridpur District and is spread over Alfadanga Upazila. Administratively the area is covered by 2 unions namely Pachuria and Gunbaha UP within Alfadanga Upazila. It comprises 1,558 hectare,6 WMGs with 6 villages. There are 7,391 households with a population of 31,781.

The water infrastructure will benefit from a major overhaul: rehabilitation of 4(four) regulator and re-excavation of khals over a total length of 6.37 km will reduce flooding and drainage congestion and thus benefit agricultural production. The cost of rehabilitation is estimated at some Tk. 225.00 lac.

A Maintenance Plan for the subunit-II has been formulated where responsibilities have been delineated and costs for maintenance worked out. The total cost of preventive and periodic maintenance for subunit-I has been estimated as Tk. 10 lac per annum of which WMA share would be Tk. 2 lac with BWDB bearing Tk. 8 lac. The WMA/ WMG share comes to Tk.67/ ha/ year. The cost of WMO training has been estimated at about Tk. 8.00 lac.

The gross area of the Hariharnagar Sub-unit (SIP-1) is 1,558 ha. and net cultivable area is 1,293 ha. Present cropped area is 3,177 ha. with a Cropping Intensity of 246%. The future total cropped area has been estimated at 3,439 ha. with a Cropping Intensity of 266%. Production of cereal crops will be increased by 2,811 metric tons (52%) and other crops by 993 metric tons (14%) with overall increase in production by 3,804 metric tons (30%) after rehabilitation of the Sub-project. Rice production has been estimated to be increased from 5221 to 7973 MT per year with an additional increment of 2753 MT representing an estimated added value of Tk. 619.31 lac. Average yield of rice has been estimated to be increased from 3.69 ton per hectare to 4.80 ton per hectare.

To improve the existing agricultural conditions and to transfer the modern technology to the farmers’ level Training, Demonstration, Farmers’ Field School (FFS), Workshop, Fair and Motivational Tour have been planned for implementation by the project. The cost of agricultural development (enhancement) activities of the SIP have been estimated at Tk. 20.61 lacs for the entire project period.

There are about 55 ha of fisheries resource in the sub unit area among them 35 ha in culture fisheries and rest of 19 ha in capture fisheries, and estimated total production is 127 MT / year (Table - 01, Annex - 4). Culture fish production can be increased from 124 MT to 171 i.e by 47 MT and capture fish production will be increased from 2 MT to 5 MT i.e by 3 MT, after rehabilitation of this sub unit area and total annual incremental benefit would be Tk. 70 lac (Table - 3, Annex-4).

Financing of the fisheries activities would require both beneficiary and project contributions. Beneficiaries will be responsible for all direct inputs cost required for fisheries production, both culture and capture because they will manage the activities through CAPs. The project will bear the cost of demonstration, basic training, refreshment training and motivational tour. The training cost (excluding preparation of modules) amount to some TK.19.20 lac (Table 04, Annex -4)

Alfadanga Boalmari the SIP-1 area comprises 18 villages and 2 Unions partly or fully, under Alfadanga Upazila of Faridpur district. The river Madhumati exist at the south-eastern  boundary and Barshai river at the eastern boundary of SIP-1 area. The,Naturia khal, Sigram khal, Burir khal, Hidadanga I, Hidadanga-2 and other small khals crossed the SIP-1area. The following table shows the general status of the SIP-1area. Gunbaha and Pachuria UP office are located within the SIP-1 area. Total household of the SIP-1 is 3864, population 16311 and average HH size is 4.2. The percentage of farmers is 38.23%. SIP-1 the age group 18-45 of population is 47.3%, significantly higher than the other three groups, followed by children <17 years 30%.The population who are in between  18-60 years considered as working age group or productive population. The data shows that the working age group of the surveyed population is about 57%. The percentage of female headed and male headed household is 5% and 95% respectively. The non-productive population involves those who are able to work but enjoy social benefit at the cost of productive people. Generally children younger than 17 and adults older than 61 are considered non-productive people. Farming is the main occupation of all categories of farmers 38.23%, followed by business 27.37%, services 23.38%.The other occupation 6.83% which includes; daily wage  laborers, fishermen, hawkers, traders. The wage labours are mostly found in landless, marginal and small farm families. Fish farming, trading and business as family occupation is found in all level farmers.

The average incidence of poverty in project area is 40%-45%, a figure consistent with the district figure shown in the poverty map of Bangladesh (ref: BBS web site- poverty map). In the map the poverty incidence for the district Faridpur is between 38%-48%. The average rural poverty for Bangladesh is 34%. A more than average poverty level therefore exists in SIP-1. For improving the socio-economic condition of the Female Headed households and destitute a total amount of Tk.2915000 is allocated.

WMO formation process commenced with mobilizing Facilitators and awareness creation. Union-level consultation workshop were conducted and consent for rehabilitation work has been obtained from the communities. As the population has increased significantly since the Feasibility Study (FS) time, the project “re-demarcated WMG areas”. Consequently, the total number of WMGs increased from 2 (at FS stage) to 6. Elections were held and all the WMGs have been formed.

Participatory mechanisms will be adopted for developing and reaching consensus on “WMG-wise water and land use plans”, mainly for crops, fishery and other IGAs. Facilitators guided by ISPMCs and PMO staff will assist WMGs to implement these Plans. Sub-committees are established which “focused” on specific tasks of WMO. There will be O&M Agreements between WMA and BWDB.

The Sub unit Implementation Plan should have practical implementing mechanisms to establish “horizontally and vertically integrated WMO Network”, with WMG as the “Base” organization. WMO Network (WMG-WMA) would be utilized by line agencies like BWDB, DAE, DoF, and other GoB agencies (in their Extension and Input Services).  WMOs need to be equipped with appropriate technology. WMOs should organize Collective Action, CA for effective O&M, to provide WMO-managed input-output services to members in agriculture, fishery and other income-generating activities and value-addition. WMOs will also develop partnerships with the Private Sector and undertake business ventures. 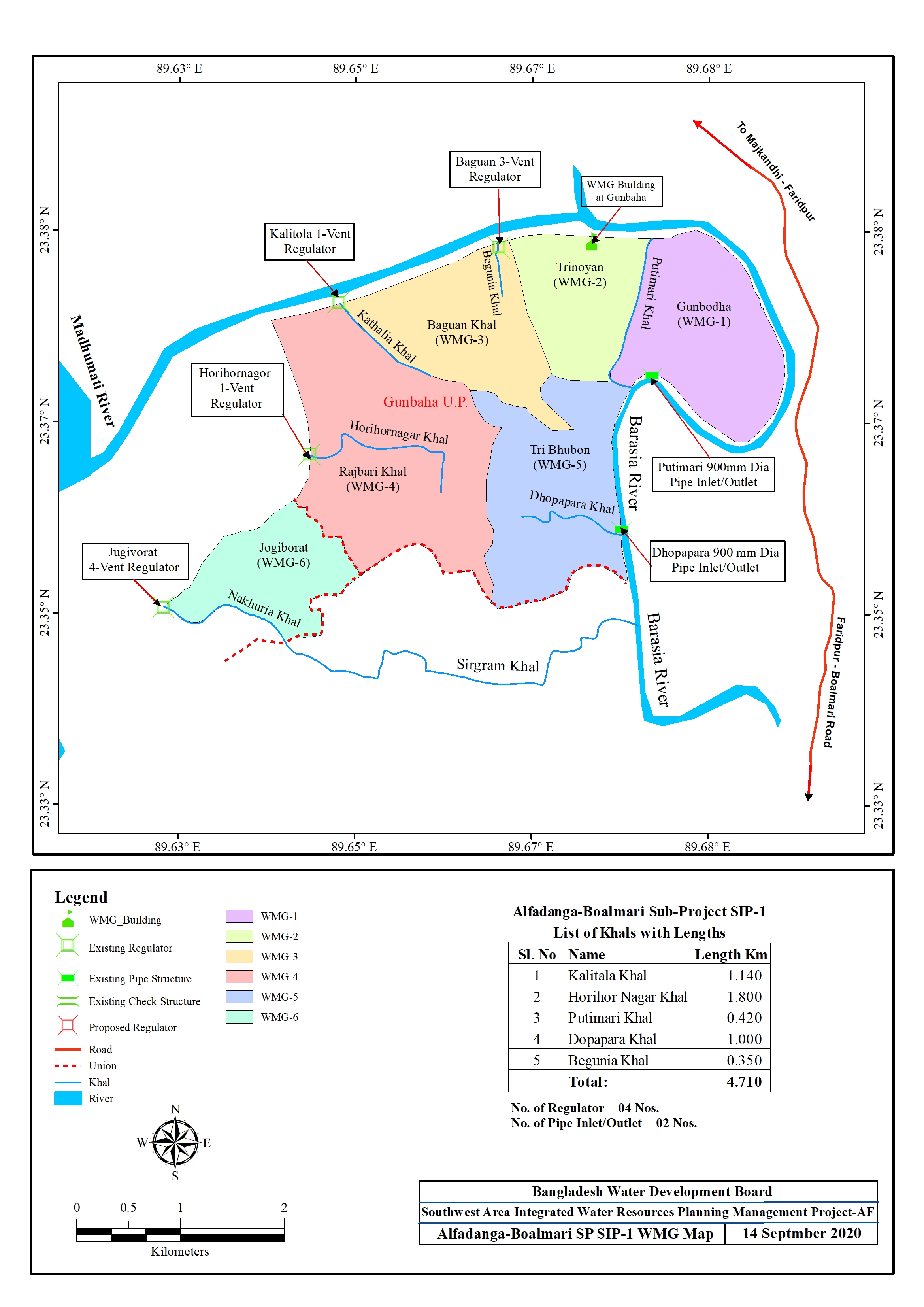