August 2019 — Unlike most of the young villagers in Faridpur Sadar, Md. Luutfar Rahman Rubel (29) of village Kachnail had a strong affiliation towards new farming technologies. He is a fit example of educated youth taking agriculture as profession and bringing a remarkable change in society. After completing his graduation from Government Rajendro College, Faridpur; he started Tilapia & Carp culture in his small pond of 8 decimals with traditional approach. 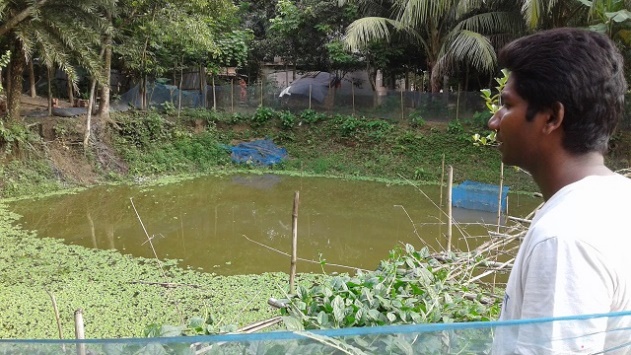 In 2018, he first came to know about SAIWRPM-AF Project and its objective to benefit the WMG members by providing support in basic agriculture & fisheries skills, market oriented production of high value crops & fish species, entrepreneurship, the introduction of improved technologies and linkage with different market actors and marketing. As an early adopter he immediately enrolled in Kendar Khal WMG under Beel Sukunia Sub-project and afterward elected as President of the WMG.

During 2018, he attended a training event organized by SW project and learnt about fish production techniques & advance technologies, high-value fish species and climate smart fish production especially Shol cultivation in small pond. Intense desire for learning and business acumen of Mr. Rubel drew attention of ISPMC Fisheries Team and other PMO officials in the training. After the training handholding visits was organized by project subject matter specialists to his pond unit. Having the technical advice, he renovated his pond for this innovative practice and collected a pair of Shol brood from the natural water body of Beel Sukunia and stocked in his pond for natural breeding. 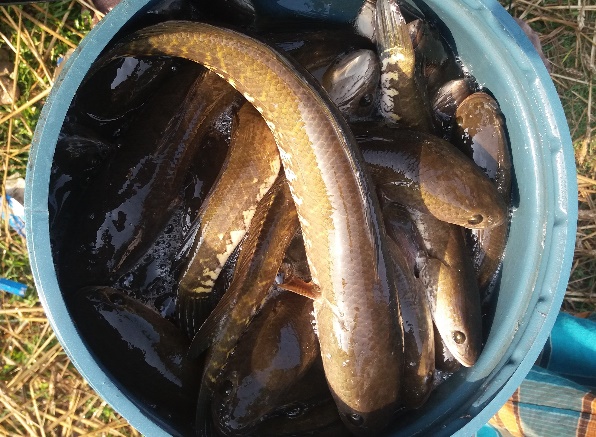 Shol, a snakehead fish is one of the most demanding fish in Bangladesh. The species is known for its taste and nutritive value. The beels and wetlands of Southwest is the main source of this fish. Declining trend of capture fishery from the natural water bodies due to over fishing and climate change effect resulted in paucity of Shol in daily market. So the market price is very lucrative compared to other common carps and Tilapia. Hence, the importance of artificially propagated seed is felt need for the cultivation of this important species. Southwest project as well as a bunch of enthusiastic farmers are trying to address induce breeding operation.

After 4-5 months of nursing, the fingerlings average weight attained 650-750g. Mr. Rubel with the assistance of Southwest project made his sales plan and communicate with different local & regional markets to explore better market price and suitable trade time. Having the info. he sold 127 Kg of Shol worth of BDT 112,600 at different markets like Kanaipur, Chungirmore and Faridpur. Still there is approx. 100kg stock in his pond with tentative market price of BDT 50,000. On the other hand, his total expenditure was BDT 38,700. So the estimated profit is BDT 123,900 (approx.). In July 2019, Rubel expanded his business and stocked two more pair brood in two different ponds.

“I have never thought that Shol cultivation is such  a highly profitable business and could be possible at pond environment. If I  continued with carp and Tilapia with traditional approach, it wouldn’t be  possible to earn more than BDT 20,000 in ten month of time. Thanks to Southwest  project for the innovative idea and assistance to change my livelihood,” said Rubel.

As an innovative farmer he shows the attractiveness, and could be a role model for other farmers. Around 500 community people including WMG members, fish farmers, and representative of Youth Development Department visited his pond and innovative farming. As a farmer to farmer learning process three farmers from Talma, Singhaprotap & Modhukhali village under the project area collected brood and replicating the practice.  This innovation opens a new business window for the WMG farmers. Poor fish farmers can be benefited significantly through replicating this practice even at their unused small ditches or ponds.